The Houston Texans have placed DB Terrence Brooks on injured reserve Thursday with a lung contusion, per Aaron Wilson. 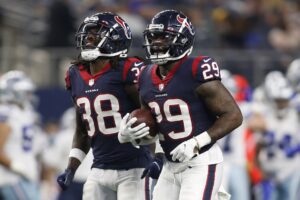 Brooks will now miss at least the next three games while on the injured reserve list.

Brooks, 29, is a former third-round pick of the Ravens back in 2014. Baltimore waived him at the start of the 2016 season and he was later claimed off of waivers by the Eagles.

Brooks was in the final year of his four-year, $2.906 million contract when the Eagles traded him to the Jets for the 2017 season. New York elected to bring him back on a two-year contract.

However, the Jets later declined their option on Brooks and he eventually signed a two-year contract with the Patriots in 2019. From there, he signed a one-year contract worth $2 million with the Texans.

In 2021, Brooks has appeared in six games for the Texans and recorded five tackles and no interceptions.