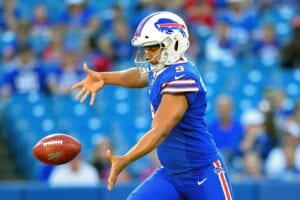 According to Jourdan Rodrigue, the Rams are also sending the Packers a seventh-round pick with Bojorquez, and getting a sixth-round pick back in return.

Bojorquez, 24, was signed as an undrafted free agent out of New Mexico by the Patriots in 2018. He spent training camp with New England before the team waived him in September, and the Bills claimed him the next day.

Bojorquez had spent the past three seasons with the Bills as the team’s primary punter. He signed a one-year $1 million deal with the Rams back in April.