Veteran WR Danny Amendola has decided to retire after 14 years in the NFL, according to Adam Schefter. 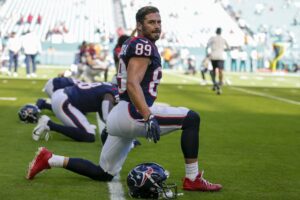 “It was better than I could have ever imagined,” Amendola said about his career.

Schefter says that Amendola had interest around the league this offseason but is ready to pursue other interests, which includes potentially catching on with a broadcasting network.

The Lions signed Amendola to a contract and he returned to Detroit on another one-year deal before catching on with the Texans for the 2021 season.