According to Jeremy Fowler, the Vikings have made it clear to inquiring teams they have no plans to trade veteran WR Adam Thielen, despite some recent rumors. 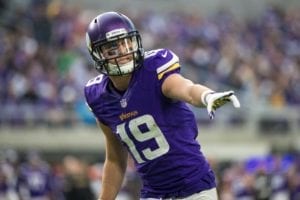 At 1-5, the Vikings appeared to have transitioned into sell mode as they dealt away DE Yannick Ngakoue just months after trading for him.

However, that doesn’t appear to apply to the veteran Thielen, who was drawing some interest from other wide receiver-needy teams per Fowler.

Thielen, 30, wound up signing on with the Vikings as an undrafted free agent out of Minnesota State-Mankato back in 2013. He spent his rookie season the Vikings’ practice squad before returning to the team on a future/reserve contract the following year.

Minnesota brought Thielen back for the 2015 season on a one-year exclusive rights deal before signing him to a four-year, $19.240 million contract that included $11 million guaranteed in 2017.

Thielen was set to make base salaries of $5.85 million and $5.35 million over the next two years of the agreement before agreeing to a four-year extension last offseason worth as much as $73 million.

In 2020, Thielen has appeared in six games for the Vikings and caught 32 passes for 415 yards receiving and seven touchdowns. 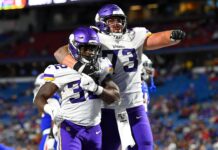