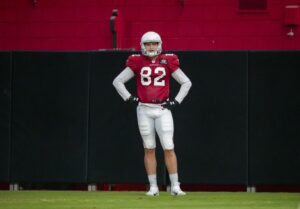 From there, Cantrell was on and off of the Chargers’ roster before joining the Cardinals last year. He had a brief stint with the Patriots before Washington signed him to their practice squad and brought him back on a futures contract this past January.

During his college career at Texas Tech, Cantrell caught 158 passes for 1,873 yards receiving and 18 touchdowns over the course of four seasons and 40 games. He also rushed for three yards and a touchdown.