Aaron Wilson of the National Football Post reports that the Panthers worked out 11 players in recent days including DL Ishmaai’ily Kitchen and G Shelley Smith.

Kitchen, 27, originally signed on with the Ravens as an undrafted free agent out of Kent State back in 2012. He lasted just a few months with the Ravens before he was cut at the start of the 2012 season and later claimed by the Browns.

Kitchen wound up re-signing with the Browns as a restricted free agent this past May, but was unfortunately among the team’s roster cuts over a month ago.

The Lions signed him to a contract a few months ago, but cut him loose just a few weeks later.

In 2014, Kitchen appeared in 12 games and recorded 43 tackles for the Browns.

Smith, 28, is a former sixth round pick of the Texans back in 2010. He lasted a little over two years in Houston before he was cut and later claimed by the Rams.

The Dolphins would later sign him to a two-year contract in March of last year, but he lasted just a year in Miami.

Smith later signed another two-year, $5.65 million contract contract with the Broncos this past May, but was cut loose close to a month ago.

Smith hasn’t appeared in a single game for the Broncos this season. 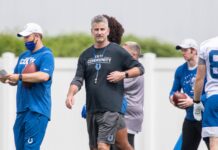