Cardinals HC Bruce Arians mentioned that they are in much better shape this offseason based on who they’ll have returning for the 2016 season.

“Looking at the team that’s coming back versus where we were this time last year, very few holes to fill,” Arians said, via Zach Buchanan of the Arizona Republic.

Packers WR Davante Adams believes his struggles this season have made him “mentally tough.”

“Having two things that really stopped me from playing,” Adams said, via PackersNews.com. “I’ve never really had to deal with that before. But you learn to put up with it. You learn to stay mentally tough throughout that process, and I think that’s something that could help me (going forward), as a guy who plans on playing a long time in this league.”

“I know what I’m capable of,” Adams added, “and I know those are the types of things I can do. So it’s not like I personally needed that. But at the same time, it’s something that’s good to put on display and kind of remind people. People get caught up in the games when things didn’t go how I wanted them to, but stuff’s going to get blown out of proportion. They don’t care about different variables that might factor in, but you have to learn to block that out and be positive and figure out what you can do next.” 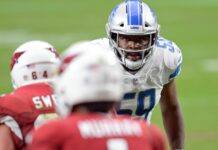