Matt Maiocco reports that the 49ers are placing TE George Kittle on injured reserve due to a calf injury. 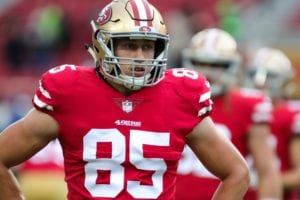 Maiocco adds that the team believes he would be dealing with the nagging injury all season if he continued to play.

In 2021, Kittle has appeared in four games for the 49ers and recorded 19 receptions for 227 yards and no touchdowns.