After the Packers’ season ended far, far sooner than anyone expected, the questions naturally turned to QB Aaron Rodgers and his future. 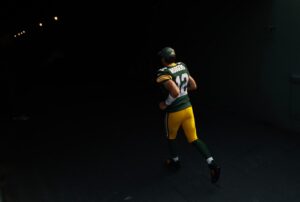 The veteran understandably was shell-shocked following the 49ers’ walk off, 13-10 win, and he largely deferred questions about his future until after he’d had time to collect his thoughts more.

He acknowledged the very real uncertainty about whether or not he’d just played his final game as a Packer, though. He was specifically asked about whether he thought he could still win a Super Bowl with the Packers, as Green Bay has a challenging cap situation this offseason.

Rodgers’ own contract is among those that will need to be addressed. He’s set to have a cap hit of over $46 million in 2022, which is also the final year of his deal. A trade or extension are two ways to lower that and Rodgers’ feelings will go a long way toward dictating which one the Packers choose.

Rodgers admitted falling short in the playoffs yet again could not help but play a role in his decision. He noted once again there is a lot about 2022 that is unclear for the Packers, and he plans to discuss things with GM Brian Gutekunst before making a decision on how he wants to approach next season.

“Of course it does,” he replied. “But you know there are a lot of decisions to be made, a lot of players whose futures are up in the air. Definitely will be interesting to see which way some of those decisions go. But I’ll have conversations with Brian in the next week or so and get a little bit more clarity. And think about my own future and how much longer I want to keep doing this.”

Packers HC Matt LaFleur said after the game that the team obviously wants Rodgers back for another season.

“Certainly, we want him back here,” LaFleur said. “I think we’d be crazy not to want him back here. He’s going to be the two-time MVP. This guy does so much for our football team. No only what you guys see on Sundays or every game day, but what he does in that locker room. How he leads. I just know what he puts into this thing. And certainly, I’m extremely disappointed that we couldn’t get over the hump, for not only him, but for everybody in that locker room.”

Rodgers was obviously the subject of a lot of trade speculation last year, with 2021 viewed as a potential “Last Dance.” But things improved between the quarterback and the front office and it’s reportedly the team’s “no. 1 priority” to bring him back in 2022.

We’ll have more on the Packers and Rodgers as the news is available.