Jets DL Quinnen Williams has been a buzzy trade candidate this week in New York. It doesn’t help that New York has a history of breaking up with star players, especially recently. But the former No. 3 overall pick in 2019 says he’s tuning out all of that.

Patriots QB Cam Newton has been in an awful slump that coincides with his return from a COVID-19 diagnosis. Newton wasn’t able to practice during that time and already was working to catch up after not joining the team until late in the summer. Patriots QB Jedd Fisch said the lack of practice time absolutely plays a role in Newton’s poor play of late and also is the key to turning it around.

“Practice is what helps you there and when you don’t have as much practice time as he probably would have liked over the last three weeks, there’s some things that may or may not have slipped. . . . I don’t think there’s anything there that is a problem right now that is not fixable,” Fisch said via ESPN’s Mike Reiss. 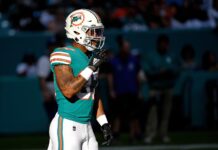