Dolphins QB Tua Tagovailoa can be a lightning rod for criticism given his draft status and career performance so far, and he caught a stray last week when former Saints HC Sean Payton said on a FOX Sports talk show that he thought it was inevitable backup QB Teddy Bridgewater would take over at some point. That says a lot about how much Payton thinks of Bridgewater as well after coaching him in New Orleans, not just Tagovailoa, but regardless the ex-coach had to eat crow after Tagovailoa’s incredible Week 2 performance.

“I’ve been somewhat hard on Tua and wrong really because these first two games have been really impressive,” Payton said on FOX Sports via Barry Jackson of the Miami Herald. “Watching the game, [Waddle and Hill] reminded you of [Mark] Clayton and [Mark] Duper… Credit [HC] Mike McDaniel and those guys; it’s one of those teams that’s drinking the Kool-Aid and playing well. They had a good defense a year ago. Now they have a good offense and explosive offense, and Tua has been following the game plan. Certainly, I’ve been wrong and he’s been impressive.” 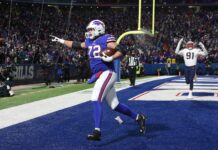