Chargers HC Brandon Staley said QB Justin Herbert is day-to-day after suffering a fracture to his rib cartilage against the Chiefs.

“He’s gotten a lot of rest since the last game,” Staley said, via ESPN. “He’s feeling more comfortable. I know that he was able to do some light throwing yesterday, some rotational work, but we’re just going to take it day by day and see where his comfort level is.”

Staley said it will be up to Herbert as to whether he’s able to play against the Jaguars on Sunday.

“It will start with him and then obviously him feeling good about what the medical team feels like is best, him weighing the options and then us making a good decision,” Staley said.

Staley reiterated that his players’ health is of the utmost importance.

“Any player that goes through something like this, that’s your biggest responsibility as a coach is to take care of your players,” Staley said. “So I think we have full alignment with Justin and his family, his agents, and then the medical professionals, and that’s what we’re going to try to do is have alignment that way and just kind of trust the process and hopefully get him well soon.”

The Raiders declined former first-round S Johnathan Abram‘s fifth-year option this offseason, which wasn’t much of a surprise based on how Abram had played in his first three seasons. But so far Abram has responded well to the setback and is playing as well as he ever has as a Raider in the team’s first two games.

“Intelligent player, understands football, understands concepts, versatility that shows up,” Raiders DC Patrick Graham said via the Athletic’s Tashan Reed. “And he loves football. … Any football player that has some football intelligence, loves the game, has some versatility, those are usually guys that we like to have around.”

Las Vegas has moved Abram to a variety of positions, including both safety spots, nickel and linebacker. Raiders HC Josh McDaniels said one of the keys for Abram has been playing with more controlled aggression to prevent as many missed tackles.

“John has always been a guy who’s willing to hit anything that moves,” McDaniels said. “I think what John’s learning how to do is take his aggression and also learn how to play under control so that there’s less missed tackles or less overruns here or there, which is a sign of a guy who’s maturing. We’re asking him to do a lot of things; he’s answering the bell.” 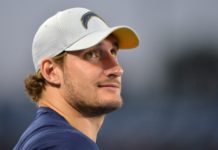