Browns HC Hue Jackson was asked about the possibility of signing WR Dez Bryant on Monday.

“I have not spoken to John about that,” Jackson said, via ClevelandBrowns.com. “We have not had a conversation about that at all.”

As for free agent WR Rishard Matthews, who is reportedly trying for the Browns this week, Jackson said “we will see.”

“We will see,” Jackson said, via ClevelandBrowns.com. “I have not seen (General Manager) John (Dorsey) since I was down there earlier. We will see how it unfolds. We have some good candidates here. I like our guys that are here. We will just see how it all unfolds as we go through the day.”

Ravens HC Jim Harbaugh told reporters on Monday that they want to “spread the load” in terms of carries for their running backs moving forward.

“We need to spread the load,” Harbaugh said, via ESPN.com. “You want fresh guys out there playing hard.

“A fresh running back is a good thing. I think running backs taking 40, 50 snaps is not necessarily a great thing. You talk about balance, put the ball in one guy’s hands for 35 plays. I don’t know if that’s balance.”

Texans QB Deshaun Watson took some pretty hard hits during Sunday night’s win over the Cowboys and was even evaluated for injury in the medical tent. However, Watson explained that he’s “built to take those hits” and is going to do whatever it takes to win. 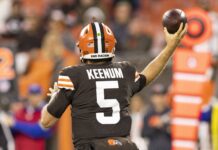