Following a second opinion, Chiefs’ QB Patrick Mahomes elected to have toe surgery following the Super Bowl. It clearly was a limiting factor, as he couldn’t move as well as he was accustomed to even though he still made plenty of plays with his legs. Mahomes added that there were plenty of other things to blame for the Super Bowl loss instead of his toe injury.

“I mean, I can’t say the toe was a problem when I played two weeks ago and I played well on it,” Mahomes said, via Pro Football Talk. “You battle through it. You’re playing football. You have to battle through injuries.”

“I just think we weren’t on the same page as an offense in general,” Mahomes added. “I wasn’t getting the ball out on time. The receivers were running routes not exactly where I thought they were going to be out. The offensive line, they were good sometimes and sometimes they let guys through. When you’re playing against a good defense like that, you’ve got to be on the same page as the offense, and we weren’t today, and that’s why we played so bad.” 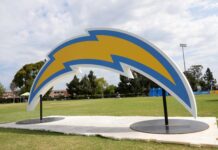