Chiefs TE Travis Kelce set a playoff record with 14 catches in the divisional round win against the Jaguars, who had no answer for him even though he was clearly the team’s top target. It’s been that way all season, with few opponents able to slow Kelce down despite being far and away Kansas City’s best-remaining weapon. Chiefs backup QB Chad Henne offered some insight into what makes Kelce so good.

“I mean, obviously he’s elusive and he’s shifty, but at the same time, he sees the field like a quarterback,” Henne said via Sports Illustrated’s Albert Breer. “So he sees the defense, he knows exactly who he’s working off of, at all times, and that’s what makes him so open. He just attacks the leverage, he kind of studies what he’s done in previous games, and he plays it off that, and gives himself different looks and sets up his routes that way. But like I said, he sees it like a quarterback, especially in zone coverages, he knows the holes that he’s supposed to get into. And we give him that freedom. Coach Reid always says ‘Hey, even in motions, you need to get off if they’re going to jam you. Just get where you need to be. We know you’re going to be in the right spot.’” 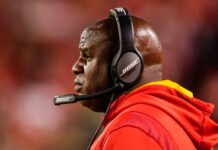 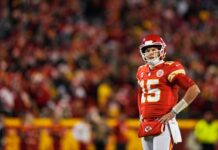