Adam Schefter of ESPN reports that veteran DT Akiem Hicks‘ agent, Drew Rosenhaus, has approached the Nears regarding an extension for his client. 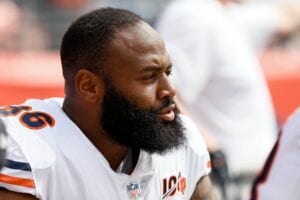 According to Schefter, Rosenhaus was spotted in Chicago today and is hoping to get a deal in place that would allow Hicks to finish his career with the Bears.

“Akiem wants to finish his career with the Bears, if possible,” Rosenhaus tells Schefter.

Hicks came up as a potential trade candidate for Chicago this offseason and one report mentioned that he had been given permission to seek a trade with another team.

However, it became clear that Hicks was likely to remain in Chicago for the 2021 season.