Falcons RB/WR Cordarrelle Patterson is set to be a free agent after a breakout season in his ninth year in the league. His versatility was unlocked under HC Arthur Smith and he quickly became a fan favorite. 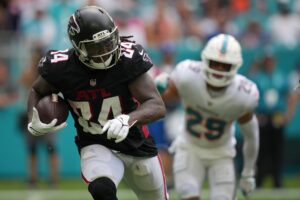 Team owner Arthur Blank says they’d love to bring him back for more.

“From our standpoint, we’d love to have [CP] back,” Blank said. “We saw the same thing that you saw on the field. I think this is a very talented player, a very talented athlete. This is a good example of when a coach understands the scheme – which he does, Coach Smith – and he takes an athlete like this and can use him in a variety of ways I think you see the kind of production that he can have. He’s a terrific young man. He’s great with the fans. He’s great in the locker room. He’s a real competitor… I hope that he’ll be a Falcon this time [next] year.”

Patterson has also been vocal about his desire to be back in Atlanta, as it’s clearly the place he’s fit in the most his entire career. His contract will play a big role, though, as this could be Patterson’s last chance to cash in in his career and the Falcons have limited cap flexibility.

Patterson, 30, is a former first-round pick of the Vikings back in 2013. He played out his rookie contract with the Vikings, but they declined to pick up his fifth-year option, which allowed him to sign a free-agent deal with the Raiders in 2017.

Patterson was later traded to the Patriots and played out the final year of his two-year, $8.5 million contract. From there, he agreed to a two-year, $10 million contract with the Bears in 2019. He signed a one-year deal with the Falcons for the 2021 season.