Tom Pelissero of NFL Media reports that an MRI confirmed that Bears G James Daniels is, in fact, out for the season with a torn pectoral muscle.

You can expect the Bears to place him on injured reserve in the coming days and add someone to their roster. 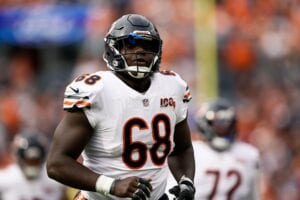 Daniels will undergo an MRI tomorrow to determine the severity of the injury.

In 2020, Daniels has appeared in four games for the Bears, making four starts for them.