Bears HC Matt Eberflus announced that they have placed OL Alex Leatherwood on the non-football injury list due to an illness and re-signed OL Michael Schofield, per Courtney Cronin. 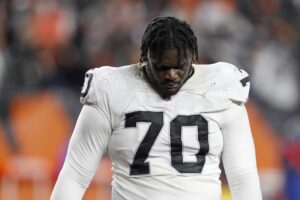 Leatherwood will miss at least four weeks on the NFI list.

Eberflus is confident that Leatherwood will come back strong: “We feel great about where he is and him coming back.”

Ian Rapoport reports that Leatherwood has been diagnosed with mononucleosis.

Leatherwood, 23, was a three-year starter at Alabama and was named a unanimous All-American and first-team All-ACC in 2020. He also won the Outland Trophy and the Jacobs Blocking Trophy. The Raiders drafted Leatherwood with pick No. 17 overall.

Leatherwood signed a four-year, $14,391,562 contract with the Raiders that includes a $7,826,591 signing bonus. The Raiders had a fifth-year option to pick up on him in 2024, but was among their final roster cuts and was quickly claimed by the Bears.

In 2021, Leatherwood appeared in all 17 games for the Raiders and made 17 starts between right guard and right tackle. Pro Football Focus had him rated as the No. 80 guard out of 82 qualifying players.

Schofield, 31, is a former third-round pick out of Michigan by the Broncos in the 2014 NFL Draft. Denver elected to waive him at the start of the 2017 season and he was later claimed off of waivers by the Chargers.

Schofield played out the final year of a four-year, $2,777,200 rookie contract before returning to Los Angeles on a two-year contract in 2018.