Bears HC Matt Eberflus confirmed that QB Trevor Siemian is undergoing surgery on an oblique injury and will miss the rest of the season, per Adam Jahns. 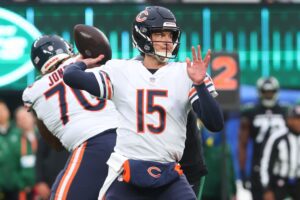 Eberflus mentioned that Siemian suffered the injury during pregame warmups for Week 12 against the Jets,

Simian will be placed on the injured reserve in the near future.

Siemian, 30, is a former seventh-round pick of the Broncos back in 2015. Denver traded him to the Vikings in 2018 for a fifth-round pick.

He signed with the Saints’ practice squad last year and re-signed to a one-year deal last offseason. He was later added to the Saints practice squad coming out of the preseason before signing him to the active roster. He signed on with the Bears back in March.

In 2022, Siemian as appeared in two games and completed 57.7 percent of his passes for 184 yards, one touchdown and one interception.