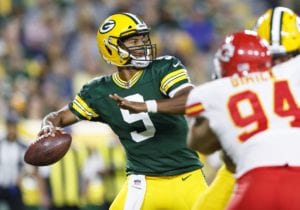 The Bears are dealing with injuries to quarterbacks Nick Foles and Mitch Trubisky, so it makes sense that they would take a look at an available quarterback.

Kizer, 24, is a former second-round pick of the Browns back in 2017. He was later traded to the Packers last year as part of the deal for Damarius Randall.

Green Bay waived Kizer last year and he was later claimed off waivers by the Raiders. He is in the final year of his four-year, $4.948 million contract that included $2.893 million guaranteed and set to make a base salary of $1.13 million for the 2020 season when the Raiders waived him after this year’s draft.

Kizer later had a brief stint on the Raiders’ practice squad.

In 2018, Kizer appeared in three games for the Packers and threw for 187 yards while completing 47.6 percent of his passes to go along with no touchdowns and two interceptions.