Ian Rapoport reports that “all options” remain open for the Bengals and QB Andy Dalton this offseason, including keeping him for the 2020 season and continue efforts to trade him.

Rapoport points out that many of the team’s Cincinnati have spoken to regarding trades for Dalton have already acquired quarterbacks.

Rapoport notes that the Bengals are in “no rush” to move Dalton and are comfortable keeping him as a backup to QB Joe Burrow, who is expected to be the No. 1 overall pick next month.

Dalton, 32, is a former second-round pick of the Bengals back in 2011. He’s currently entering the final year of his seven-year, $97.09 million contract, which includes $17 million guaranteed.

In 2019, Dalton appeared in 13 games for the Bengals and threw for 3,494 yards while completing 59.5 percent of his passes to go along with 16 touchdowns and 14 interceptions. Pro Football Focus has him rated as the No. 27 receiver out of 37 qualifying players. 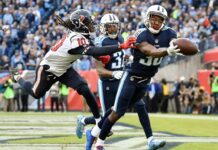