According to Aaron Wilson, the Bengals placed LB Joe Bachie on the COVID-19 list on Thursday. 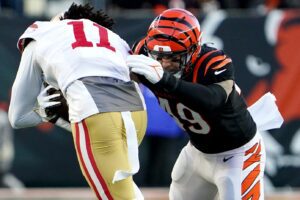 Bachie is already on the injured reserve and this will prevent him from rehabbing at the team’s facility.

Bachie, 23, signed with the Saints as an undrafted free agent out of Michigan State following the 2020 NFL Draft. He was waived by the team coming out of camp but returned to the practice squad.

Bachie was waived by the Eagles back in May and later claimed off of waivers by the Bengals. He was added to their practice squad coming out of the preseason and bounced on and off their active roster.

In 2021, Bachie appeared in nine games and recorded 29 tackles and one pass defense.