Doug Kyed of NESN reports that the Bengals brought in former Raiders FB Marcel Reece for a workout on Wednesday.

This is the third reported visit for Reece after he previously met with the Patriots and Jets since becoming available.

Reece served his four-game suspension, which dated back to last year, when he was cut loose by the Raiders.

In 2015, Reece appeared in 15 games for the Raiders and ran for 36 yards on 10 carries to go along with 30 receptions for 269 yards receiving and three touchdowns. 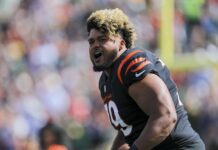