In a radio interview with WFAN last week, former QB and CBS Sports commentator Boomer Esiason seemed to suggest his coworker at CBS, former Steelers HC Bill Cowher, could consider coming out of retirement to coach the Jets. 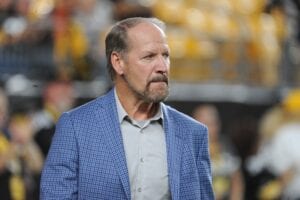 Cowher retired in 2007 and has worked with Esiason since then. Esiason suggested Cowher might be feeling the itch to return to the sideline.

“All I know is that yesterday, [Cowher] was showing me and Nate [Burleson] film of him coaching on the sideline where he was mic’ed up, and we looked at each other like, ‘Hmm, what does that mean?’ Is he sending a message? I’ve worked with him for 14 years and I’ve never seen that,” Esiason said, via Pro Football Talk.

Esiason added that if Cowher does come back, the Jets job would be appealing to him for a number of reasons.

“He was saying to me yesterday, he’s the one that told me the Jets job is going to be really attractive, and they could hire whomever they want, and he told me he loves [GM] Joe Douglas,” Esiason said.

However, ESPN’s Rich Cimini spoke with Cowher about the idea of returning to coaching and the Hall of Famer made it clear that it’s not happening.

“I have no interest in coaching,” Cowher told Cimini.

“I have too much respect for the coaching profession to talk about a job that isn’t open,” Cowher said. “From that perspective, any job that is open, I have no interest in coaching.”

Cowher, 63, spent 15 years as the Steelers head coach before retiring from the profession following the 2006 season.

In total, Cowher led the Steelers to a record of 149-90-1 (62.3 percent), which includes 10 trips to the playoffs, two Super Bowl appearances and one Championship. He was inducted into the Pro Football Hall of Fame last year.