The Buffalo Bills announced that they’ve re-signed CB Levi Wallace to a one-year deal on Wednesday. 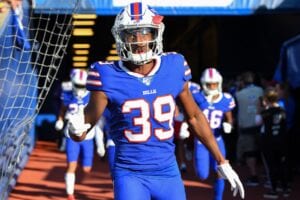 Buffalo declined to tender Wallace as a restricted free agent this offseason, but reports said that a return could be coming.

Wallace, 25, wound up going undrafted out of Alabama back in 2018. He later signed a three-year contract with the Bills.

However, Buffalo waived him at the start of the 2018 season and later signed him to their practice squad. He returned to the Bills last year on an exclusive rights contract.

In 2020, Wallace appeared in 12 games for the Bills and recorded 48 tackles, two interceptions and eight passes defended.