The Buffalo Bills have signed DT Tim Settle to a two-year deal, according to Adam Schefter. 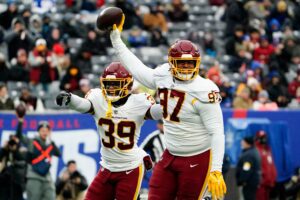 Settle will provide depth to the interior defensive line of Buffalo’s defense, and will reunite with former Virginia Tech teammate Tremaine Edmonds.

Settle, 24, is a former fifth-round pick of the Commanders back in the 2018 Draft. He signed a four-year deal with Washington following the draft, which expired this past offseason.

In 2021, Settle appeared in 16 games for Washington, he amassed 13 total tackles including four tackles for loss and one fumble recovery.