Tom Pelissero reports that the Bills have agreed to terms with former Dolphins P Matt Haack. 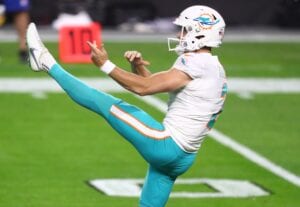 Haack, 26, signed with the Dolphins as an undrafted free agent out of Arizona State in 2017. He agreed a three-year, $1.66 million deal with Miami.

Haack has been Miami’s starting punter since then. He made a base salary of $645,000 for the 2019 season and was re-signed to a one-year restricted deal in April of 2020.