According to Ian Rapoport, the Broncos and WR Courtland Sutton have agreed to terms on a four-year, $60.8 million extension. 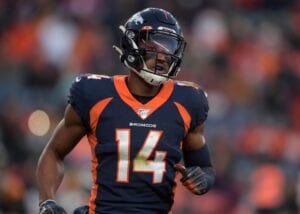 The deal also includes $34.9 million in guarantees. Denver locked up WR Tim Patrick last week on a long-term deal and it appears Sutton wasn’t that far behind.

Sutton was entering the final year of his rookie deal and coming off a torn ACL that wiped out nearly all of his 2020 season.

Sutton was scheduled to be an unrestricted free agent in 2022.