According to Ian Rapoport, the Cardinals are signing WR DeAndre Hopkins to a two-year, $54.5 million extension. 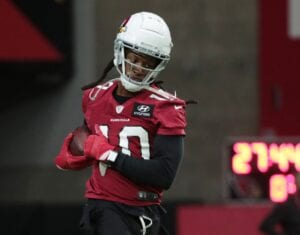 That’s $27 million a year in new money for Hopkins, who represented himself in negotiations with the goal of becoming the NFL’s highest-paid receiver in terms of yearly average.

Rapoport adds the last year is voidable, so this could be a one-year, $39.585 million deal at some point. Hopkins also negotiated a massive $27.5 million signing bonus. Aaron Wilson says $42.75 million is guaranteed at signing.

Arizona also granted Hopkins a no-trade and no-tag clause, which is big for the veteran after being traded by the Texans this year with three years still left on his deal, per Rapoport.

Part of the reason Houston decided to trade Hopkins this offseason was that they were reluctant to pay him the kind of money he was looking for in his next contract.

With the new contract, Hopkins is under contract for five years at $94 million for an $18.8 million per year average.

Hopkins, 27, was taken with the No. 27 overall pick back in 2013. He’s currently in the third year of his five-year, $81 million extension that includes $49 million guaranteed.

In 2019, Hopkins appeared in 15 games for the Texans and caught 104 passes for 1,165 yards receiving and seven touchdowns. He also rushed for 18 yards.