According to Mike Klis, Broncos LB Alexander Johnson has been diagnosed with a fully torn pectoral muscle, which will sideline him for the rest of the season. 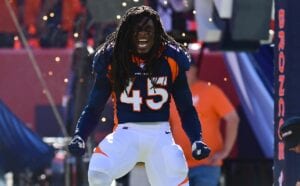 It’s another big blow for the Broncos defense, which has now lost both starting inside linebackers to the same injury.

Johnson, 29, wound up signing on with the Broncos as an undrafted free agent out of Tennessee in 2018. He managed to make the 53-man roster coming out of the preseason but was later waived and re-signed to the practice squad.

In 2021, Johnson appeared in six games for the Broncos and recorded 32 total tackles, two sacks, one fumble recovery and three pass defenses.