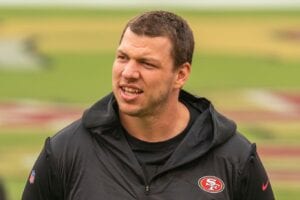 Compton can be activated from the list at any point between now and the start of the regular season.

Compton, 32, is a former sixth-round pick out of South Dakota by Washington back in 2012. Compton spent four years in Washington before signed a one-year contract with the Falcons in 2016.

Compton spent a year with the Bears and Vikings before the Jets signed him for the 2019 season. The 49ers had signed Compton to a one-year, $3 million deal in 2020 but later restructured it.

The 49ers re-signed Compton to a one-year deal last year before joining the Broncos this past March.

In 2021, Compton appeared in all 17 games for the 49ers and started seven games.