According to Adam Schefter, Broncos WR KJ Hamler suffered a torn ACL and will miss the remainder of the season. 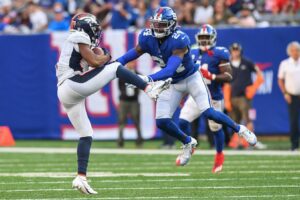 Hamler exited the game with a left knee injury during the second quarter in Week 3 against the New York Jets.

Hamler, 22, was a two-year starter at Penn State and earned second-team All-Big Ten honors before being selected by the Broncos in the second round of the 2020 NFL Draft.

In 2021, Hamler has appeared in three games for the Broncos, recording four catches for 46 yards.