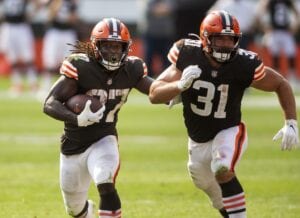 Janovich, 27, is a former sixth-round pick of the Broncos back in 2016. He was in the final year of his four-year, $2.5 million contract when he and the Broncos agreed to a three-year, $5.7 million extension that included a signing bonus of $1.35 million and total guarantees of $3.22 million.

Denver later traded Janovich to the Browns this past March for a seventh-round pick in 2021.

In 2020, Janovich has appeared in nine games for the Browns and rushed for four yards on two carries to go along with two receptions for 13 yards receiving and no touchdowns.

Browns “All In” On Baker Mayfield As Quarterback, No Rush To Get Extension Done