The Cleveland Browns announced Saturday that they’ve elevated TE Jordan Franks from practice squad to their active roster for Week 3. 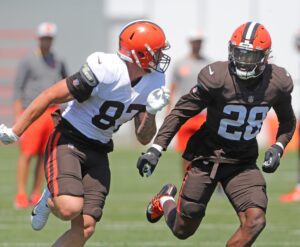 Franks, 25, wound up going undrafted out of UCF back in 2018. He later signed a rookie contract with the Bengals and was on and off of their roster for two years before he was waived last year.

Franks had a brief stint with the Eagles before the Browns added him to their practice squad and brought him back on a futures contract.

In 2018, Franks appeared in six games for the Bengals and caught two passes for 27 yards receiving.