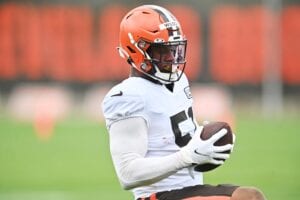 Garafolo adds that Wilson is expected to miss “some time” and a time frame of recovery will become following evaluations.

Ian Rapoport also reports that season-ending surgery is “on the table” for Wilson.

The Browns had Wilson working with the second-team unit on Tuesday when he suffered a left leg injury and was carted off the field.

In 2019, Wilson appeared all 16 games for the Browns and recorded 82 tackles, one sack, an interception, a forced fumble and seven passes defended.

Browns Insist They Have No Plans To Trade Odell Beckham

186,519FansLike
7,623FollowersFollow
276,031FollowersFollow
© NFLTradeRumors.co is an independent news source and has no affiliation with the National Football League (NFL), NFL.com, or any team(s).
wpDiscuz