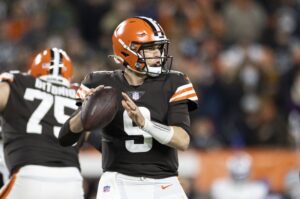 He re-signed as an exclusive rights free agent heading into 2020 but San Francisco declined to tender him as a restricted free agent this past offseason. The Eagles signed him to a contract in June before releasing him. He landed on the Browns’ practice squad, but was recently promoted to the active roster.

In 2021, Mullens has appeared in one game for the Browns and completed 20 of 30 passes for 147 yards and one touchdown.