According to Mike Garafolo, the Browns are signing DE Curtis Weaver to their practice squad on Wednesday. 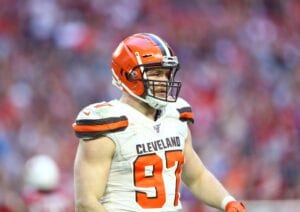 Gustin, 24, wound up going undrafted out of USC back in 2019. He later signed on with the Saints, but was waived a few months later.

The Browns later signed Gustin to their practice squad before eventually promoting him to the active roster. He was tendered as an exclusive rights-free agent for the 2021 season.

In 2020, Gustin appeared in 14 games for the Browns and recorded 30 tackles and no sacks.

Weaver, 22, is a former fifth-round pick by the Dolphin out of Boise State in the 2020 NFL Draft.

Weaver signed a four-year, $3,602,992 contract with the Dolphins that includes a $307,992 signing bonus but was waived with an injury designation last year.

Cleveland claimed him off of waivers in August of last year but eventually landed on the injured reserve with a broken leg.