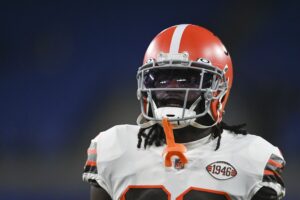 This is projected to cost the Browns around $2.43 million for the 2022 season and will allow them to match any offer he receives in free agency. However, they wouldn’t receive any compensation for him should they decline to match.

Fowler believes Johnson could have trade value down the road.

Johnson, 26, wound up going undrafted out of South Florida back in 2019. He later signed a rookie contract with the Browns and has since played out this deal.