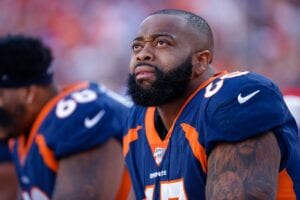 Leary, 31, wound up signing on with the Cowboys as an undrafted free agent out of back in 2012. He played out his rookie contract with the Cowboys before signing a four-year, $36 million contract that included $18.65 million guaranteed with the Broncos in 2017.

Back in February, Denver declined Leary’s fifth-year option for 2020 that would’ve cost them $8.4 million, making him a free agent.

Hunt, 26, is a former sixth-round pick of the Seahawks back in 2016. He was entering the second year of his four-year rookie contract when Seattle cut him loose coming out of the preseason and re-signed to their practice squad.

The Seahawks placed an original-round tender on Hunt that would have cost them $2.133 million for the 2020 season. However, he was later waived.

In 2019, Hunt appeared in 14 games for the Seahawks and started eight. Pro Football Focus rated him as the No. 35 overall center out of 37 qualifying players.

Browns RT Jack Conklin Confirmed Out For Rest Of 2021