The Cleveland Browns are waiving CB Herb Miller, per the NFL transactions wire. 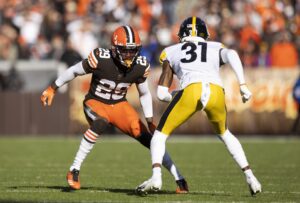 Miller, 24, went undrafted out of Florida Atlantic back in 2019. He later signed on with the Chiefs but was waived coming out of the preseason. Miller signed on to the Buccaneers’ practice squad in December of 2019 and spent the entire 2020 season bouncing between Tampa Bay’s practice squad and active roster.

Miller signed a futures contract with the Buccaneers, but the team ultimately waived him prior to the start of this season. He signed to Tampa Bay’s practice squad last season.

Cleveland signed him to their practice squad in September and he’s bounced on and off their active roster.

In 2021, Miller appeared in nine games and recorded four total tackles and no interceptions.