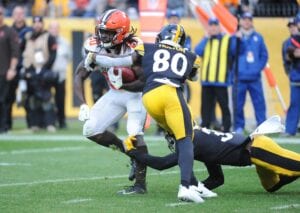 Thomas, 24, wound up going undrafted out of Ferris State back in 2018. He later signed on with the Cardinals, but last just a few months in Arizona before he was waived at the start of the regular season.

The Browns claimed Thomas off of waivers and he’s been in Cleveland ever since.

In 2020, Thomas appeared in all 16 games for the Browns and recorded 30 tackles, one sack and a forced fumble.