Odom returned to the Falcons before joining the Commanders’ practice squad. He was eventually promoted to the active roster in Washington for the 2019 season. He most recently worked out for the New Orleans Saints.

We will have more news on Odom as it becomes available. 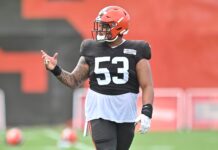