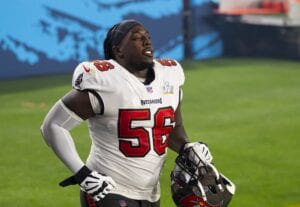 Nunez-Roches, 28, is a former sixth-round pick out of Southern Miss by the Chiefs back in the 2014 NFL Draft. He signed a four-year rookie contract but wound up being waived and signed to the team’s practice squad.

The Chiefs eventually promoted him to their active roster and tendered him at the original-round level last. However, Kansas City somewhat surprisingly waived Nunez-Roches a few weeks after he signed his restricted tender.

The Colts quickly claimed him off waivers, only to cut him loose as they trimmed their roster down to 53 players. From there, he signed on with the Buccaneers and has been in Tampa Bay ever since.

The Buccaneers re-signed him to a two-year contract worth $5 million this past March.

In 2021, Rakeem Nunez-Roches has appeared in 14 games for the Buccaneers and recorded 13 tackles and no sacks.