The Tampa Bay Buccaneers announced that they are signing WR Cyril Grayson to their active roster and are also activating G Aaron Stinnie from injured reserve. 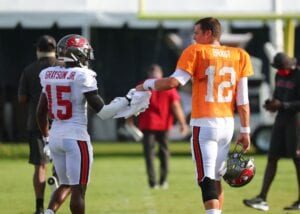 Additionally, the Bucs are elevating TE Darren Fells and RB Kenjon Barner to their active roster for Week 18.

Grayson, 28, signed a three-year, $1.62 million contract with the Seahawks, but lasted just a few months in Seattle. Grayson has since had brief stints with the Colts, Texans, Bears, and Saints before the Cowboys signed him to their practice squad.

Tampa Bay signed him off Dallas’ taxi squad back in December but was among their final roster cuts coming out of training camp. The Buccaneers re-signed him to their practice squad once and he’s been on and off the taxi squad this season.