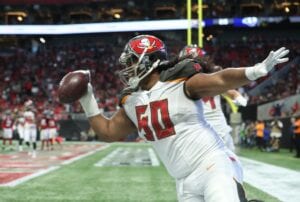 As far as knee injuries go, that’s great news, and while Vea will miss some time, Auman adds he shouldn’t have to go on injured reserve.

The Buccaneers picked up Vea’s fifth-year option which will cost them $7.638 million fully guaranteed for the 2022 season.

In 2021, Vea has appeared in nine games for the Buccaneers and recorded 18 total tackles, two tackles for loss, one sack, one fumble recovery and two pass defenses. Pro Football Focus has him rated as the No. 16 interior defender out of 124 qualifying players.