The Tampa Bay Buccaneers are picking up LB Devin White‘s fifth-year option on Wednesday, according to Jenna Laine. 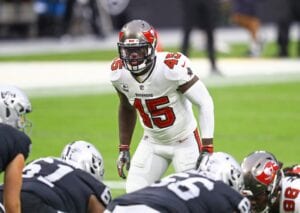 The option will run the Buccaneers $11.374 million fully guaranteed for the 2023 season, per OverTheCap.com.

Teams have until May 2 to officially exercise options on 2019 first-round picks.

In 2021, White appeared in all 17 games for the Buccaneers and recorded 128 tackles, 3.5 sacks, and three pass deflections.