According to Ian Rapoport, Buccaneers OT Tristan Wirfs is looking at an absence of about three or four weeks due to an ankle injury suffered in Week 12. 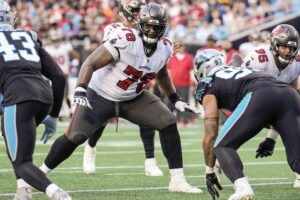 Wirfs got rolled up on during the game in a way that did not look good initially. While he’ll miss time, he appears to have avoided a significant injury.

Wirfs, 23, was a three-year starter at Iowa and earned first-team All-American honors before the Buccaneers traded up to select him with the No. 13 overall pick in the draft.

In 2022, Wirfs has appeared in and started 11 games for the Buccaneers at right tackle. Pro Football Focus has him rated as the No. 3 tackle out of 77 qualifying players.