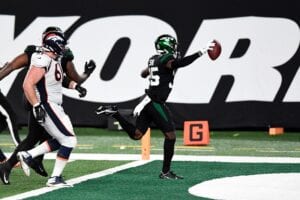 Robinson and McElroy will revert back to the Buccaneers’ practice squad on Monday.

Desir, 31, was a fourth-round pick of the Browns back in 2014. He was waived by the Browns at the start of the 2016 season and he was later claimed off of waivers by the Chargers.

Desir had brief stints with the Chargers and Seahawks before eventually being claimed by the Colts in 2017. Indianapolis signed him to a three-year deal worth up to $25 million with $12 million guaranteed only to release a year later.

Desir has played for a few teams since then including the Jets and Ravens. The Seahawks signed Desir to a one-year, $ 1.2 million deal in April, but released him before the end of training camp.

The Buccaneers signed Desir to their practice squad last month.

In 2020, Desir appeared in 12 games for the Jets and Ravens, recording 48 tackles, three interceptions, one defensive touchdown, a forced fumble and eight passes defended.