Adam Schefter reports that the Buccaneers are signing WR Breshad Perriman to their active roster on Friday. 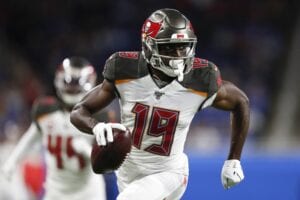 Buccaneers WR Antonio Brown will begin serving a three-game suspension for violating the COVID-19 protocols, so Perriman likely takes his spot on the roster.

Perriman, 28, is a former first-round pick out of Central Florida by the Ravens in the 2015 NFL Draft. He spent over three seasons in Baltimore before he was cut loose.

The Jets signed Perriman to a one-year deal worth up to $8 million for the 2020 season and later joined the Lions this past March on a one-year contract worth $3 million. He did not make the final roster coming out of camp and later signed on with the Bears.

Chicago waived him last month and he later signed on to the Buccaneers’ practice squad.